When a scary old tree blooms with the most beautiful pomegranates ever seen, the neighborhood kids’ mouths water with anticipation. But the tree isn’t theirs—and it has a protector! So begins the Pomegranate War, a fun, rollicking, rhyming tale of a battle between the sly, plucky young rascals and their wry, witchy neighbor who may have more than one trick up her sleeve.

Denise Doyen had me at witch. I love a good witch story! And a witch story that rhymes, too? Wicked cool. But I have to admit that I was a little surprised about…well…pomegranates. Possibly because I’m one of those people who didn’t know what a pomegranate was until 2001. And I didn’t actually taste a pomegranate until three years ago.

I know. It’s embarrassing. Because pomegranates are delicious! Still, I knew when Denise agreed to answer five questions for an interview that my first question would be pretty basic:

Why pomegranates, Denise? I feel like there must be a story there, in choosing such an unusual fruit! (It is a fruit, right?)

Botanically, I’ve read it’s an overgrown berry. Why poms? This story came from a real childhood experience of, well, pilfering pomegranates. So, I guess that choice was made long ago when a group of us kids lusted after some ‘overgrown berries’. I might also have been influenced by the recent popularity of pomegranates (their antioxidant properties discovered.) Seeing pomegranate gems sprinkled on my salad or pom juice in fancy bottles kept bringing that childhood passion to mind.

Then, trying to vividly recall that passion brought the language of delectable fruit into play. The summer I was working on this story, my older son, Paul, was writing a thesis for an advanced English Lit class. We’d head out to cafés together and work across the table on our respective projects. One evening, he mentioned an apropos poetic work he’d read in his class, “Goblin Market” by Christina Rossetti. https://www.poetryfoundation.org/poems/44996/goblin-market

I was enchanted. I saw how Rossetti celebrated each tactile, flavorful, aromatic, colorful aspect of the fruit that her goblins seductively touted. I think we rhymers can get caught up in a running cadence–and let it gallop away with us. Studying Rossetti’s poem gave me the confidence to drastically change tempo, to slow down when I wanted the reader to covet and take notice as the Pomegranate Gang did―with childlike awe: “the big, red, round, ripe pomegranate fruits”.

I noticed that your first book, ONCE UPON A TWICE, is also a rhyming picture book. Do your stories always come to you in rhyme?

Seems like it. Actually, I search for my next story by recalling books I loved as a child, then I try to glean what it was about them that so captured my imagination. As a kid, I felt a real affection for Lewis Carroll’s Jabberwocky. I recited it by heart. I loved the magical sounding nonsense words that still made sense. I enjoyed the brave boy’s adventure that unfolded like a miniature play, and yes, the end rhymes that wove it all together. So, I tried to incorporate those elements into my story about a bold, wayward mouse in Once Upon a Twice.

The qualities I wanted for The Pomegranate Witch came from ballad poems that I adored and memorized, like “Casey at the Bat”, “The Walrus and the Carpenter” and “Paul Revere’s Ride.”  Those classic-yarns and their air of nostalgia felt right for the tale I wanted to write about a spooky old farm house, an enchanted tree, the local ‘witch’ and the antics of children caught up in a neighborhood mystery. The meter of a ballad’s iambic heptameter offered a familiar yet dramatic pacing. I added some wordplay and strove to make the rhymes unique. Pondering this interview question, I realize that being able to memorize lovely language felt special and valuable to me as a kid. Rhyme is a great way to cue one’s mind to link: one line of text — to what comes next. Surely, that’s a reason I’m drawn to it.

THE POMEGRANATE WITCH is centered on fall, harvest time, and Halloween. Is it harder to sell a seasonal book? And do you have any promotional tricks that will make it a treat to plan school events with a seasonal book?

Well, fortunately Halloween is a big book-selling holiday. I received photos from friends showing The Pomegranate Witch featured in their local bookstore’s festive fall windows or Halloween table displays. Illustrator Eliza Wheeler’s cover is so charming and evocative (ditto the entire book.) She added such thoughtful, imaginative layers and visual clues to the text. The pomegranate end papers are to die for. Actually, pomegranates themselves have proven one way to expand the niche of the book. At my book signings, I demonstrate how to open a pomegranate and get at the seeds without making a huge mess! The kids are fascinated (and parents and teachers, relieved.)  The town of Madera featured readings of the book on their Children’s Stage during their Annual Pomegranate Festival. Also, the book’s underlying themes are helpful; I’ve been very pleased to see several reviews noting that the childhood escapade and provocative questions about the mysterious neighbor make the story suitable for year-round readings. That wider storyline–about childhood invention and ‘not judging a book (or witch) by its cover’―were my intended focus, not Halloween. 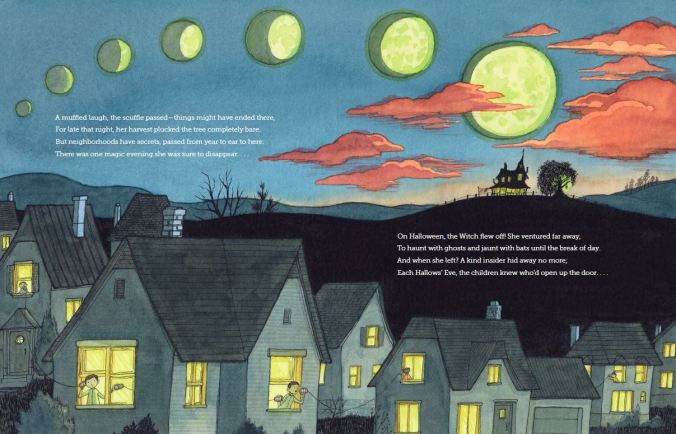 What an interesting journey you’ve had to children’s publishing! What’s the best advice you ever received along the way, and what do you always tell those rhyming picture book writers when they’re first starting out?

Yes, I’ve sort of ricocheted through the Arts: studying design, a decade as a professional dancer/choreographer, film school, a director of children’s television, a graphic artist during The Mom Years and now, writing for children. I don’t think such branching of creative interests is unusual. I know so many writers who are also musicians, actors who paint, architects who sculpt, dancers who design costumes and clothes, illustrators who are accomplished chefs. Often diverse interests inform each other. For instance, I’m pretty sure my years of tap dancing lessons at Miss Isabel Christie’s Studio sensitized my ear to rhythm, syncopation, stressed/unstressed beats, anticipatory pauses, etc. I am a much better poet because a can tap it out and “feel the beat” in my feet, my bones, my heart.

Advice for new, brave, rhyming picture book writers? That old true chestnut: Always put word choices that truly enhance your story, your setting or your characters above your rhyme. And don’t fall to the temptation of overused couplets: tree/me, sky/high, blue/too. I always gather a ton of photographs showing the places, actions, plants, animals or people who I am trying to build my story around.  Sometimes just studying those pictures, looking with a poet’s exactness at all the colors, textures, elements, motions suggested by them, will conjure an original flash, a fresh take or cool description. One of my favorite phrases in The Pomegranate Witch came about this way. I was mulling over a photo of an ancient pomegranate tree, its crown, its bark, the earth beneath and I thought “Wow, those roots undulate like snakes.” Voila. The line in the story now reads, “…dirt ripplesnaked with roots.”

My mother (a retired kindergarten teacher) tells stories about how her little language learners used their small vocabularies in novel ways. One of my favorites is when someone knocked on the classroom door and a little girl said, “Teacher! The door is talking.” I mean, how great is that? We language masters need to trick or coach ourselves out of the ruts of everyday usage, look anew, because a flash thought like “the door is talking” is where poetry begins.

And finally, what’s Denise Doyen staying up way too late and working on these days?

So, as is my habit, I searched my fondest childhood reading moments to come up with an inspiration. I loved Madeline. I wanted to live in Paris, have eleven mirror-like roommates, see carousels, city rivers and stone bridges, and stroll through parks full of kites. I wanted to survive some brief, exciting Incident (that ended with a dollhouse.) So, I’m gathering up those childish wants and feelings, as well as Ludwig Bemelman’s simple, direct language and I’m applying them to a story called “Claire’s Stairs.”  I guess we’ll see what happens…

Thanks, Cathy for the interview and Rhyme Revolution for promoting books that rhyme.

Big congrats on THE POMEGRANATE WITCH being in the Top Ten list of Best In Rhyme 2017 books! Please go visit Denise’s wonderfully eerie website to read more. As for me, I’ve got a sudden hankering for a sweet treat.

You thought I was going to say pomegranate, didn’t you? But I’m off to find ONCE UPON A TWICE. And yep, a nice juicy pomegranate to go along with it! 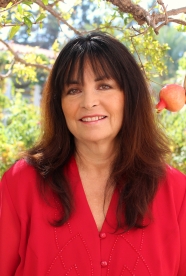 Denise Doyen studied creative writing and design at Stanford University (BA) and directing at the American Film Institute (Masters). For many years she worked in the world of children’s television where she directed the beloved Disney Channel series Welcome to Pooh Corner and Dumbos Circus as well as other productions for children including the video collection “The Mother Goose Treasury.”

Leaving show biz to raise her two boys, she embraced Mom-dom while working part-time as a graphic designer. However, her first love was writing. So, when her oldest son set off for college, Denise set off on a new creative career; she studied writing for children at UCLA. She joined SCBWI (Society for Children’s Writers & Illustrators), claimed a chair in Barbara Bottner’s Master Class and was a founding member of GOYA critique group. (GOYA: an Urdu word meaning “the suspension of disbelief that occurs in good storytelling”; it’s also a cheeky acronym for “Get Off Your Ass—and get writing!”) She loves amusing words, especially clever or elegant portmanteaus, and working late, late at night.

Her first book, Once Upon a Twice, a rousing mousey nonsense adventure, debuted in 2009 to starred reviews. It was a Junior Library Guild selection and included in several ‘best of’ lists including Kirkus Reviews “Best Children’s Books of 2009”. The book was awarded the 2010 “EB White Read Aloud Honor,” and Denise won the “2010 Ridgway Honor” for outstanding debut in the world of children’s picture books.

Her second book, The Pomegranate Witch, is loosely based on a childhood experience that she shared around a critique table one evening after Halloween, while the rest of the group was making its way through Los Angeles traffic. When she finished telling the story, her writer friends said, “That’s a book.” And now, it is.

Ms. Doyen lives with her husband, Michael, an attorney, (their young adult sons have flown the nest) and a Bengal cat, Zeek, in Pacific Palisades, CA.

Many thanks to 2017 Best in Rhyme Committee Member Cathy C. Hall for interviewing Denise Doyen about her fabulous new book

Congratulations DENISE on THE POMEGRANATE WITCH